The Ultimate Email-Marketing Checklist You Wish You Knew Before 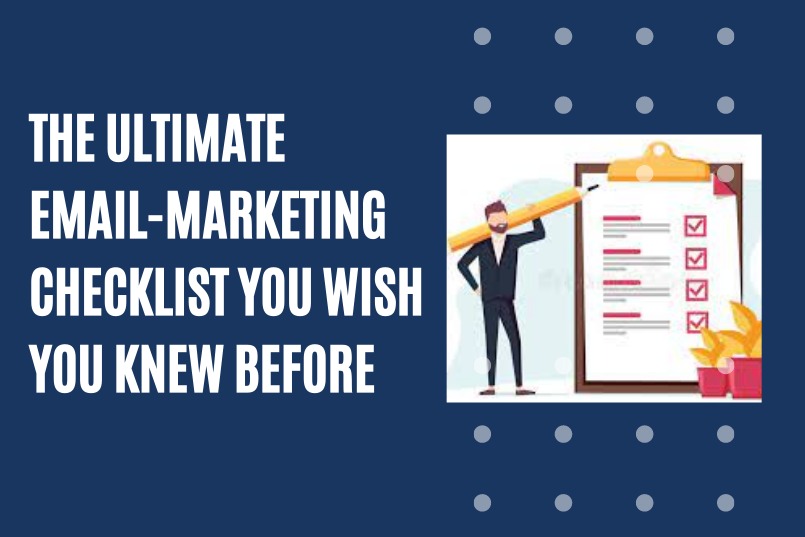 Before diving deep into the topic, let’s stay on the surface for a while and understand what email marketing is, and even today, with so many new technologies emerging why this mind-blowing marketing tool hasn’t lost its charm.

It is a bulk marketing technique. It is the act of sending a commercial message to a group of people using email. In a broader sense, every email sent to a potential or current customer would be regarded as email-marketing.

Reasons behind the ruling of email-marketing in the business world

So now, since you must have understood what email marketing is, let us make a checklist on it and see what are the checkboxes you have to tick to run a successful email marketing campaign

Before sending an email, you have to know to who you are sending it. So acquiring a database of the email-ids and segregating them would be a basic and mandatory task.

The list building should aim at both the existing customers and the new customers.

The existing customer list is obtained by building emails from the information you have about them. Your existing customers believe you a lot and would be more than happy to welcome your promotional email content and new products. Then what about new customers?

An email newsletter is a type of email that informs your audience of the latest news, tips, or updates about your product or company. They are often used for a variety of purposes, and they come in many different forms. Some are weekly digests of content, some are quarterly organization updates, and others promote new products, but there’s no end to what you can include in a newsletter. As people signup for the newsletter, their email ids can be acquired.

Provide a sign-up option for customers so that they can create an account on your site, and it will help you collect their details

Introduce an option of “Learn more about us.”

Put an option where customers can know more about your products through emails and collect email-id data from it.

Who would not want a bit of attention and care these days? People want to be addressed and want their needs to be heard. This is where the personalization of emails would be an amazing method.

Imagine a school kid getting rewarded by his teacher by calling out his name aloud and appreciating him. Compare this scenario to when the same kid gets rewarded along with everyone in the class. Which do you think would excite him and fuel his passion for doing and earning more rewards? The answer is the first kid. Why?

It is a personalized message. Sending a personalized email can be as good as having a real conversation with a person. The trust build is immense; people get connected to the brand as if it is their friend calling them. Personalized emails stand out in the subscribers’ inboxes as highly relevant emails that speak directly to them. When the emails that the subscribers receive in their inbox cater to their needs and interests, it builds trust in them and improves customer relationships and experiences.

How to personalize your emails?

No worries, we got you!

Look at this example of personalization

The human brain is tuned in such a way that the ‘what next’ question pops up every time we see or read something. Similarly, as customers receive your e-mail, it should not be difficult for them to answer the ‘what next’ question; hence providing a clear call to action in the mail itself is highly important. Your call-to-action can be several things, from simple subscribe opportunities to a value-added approach. Add value to your emails with some calls of action. Consider other options like a free sign-up link, product upgrades, new products, new deals, or free content guides.

One button or one link you send should be able to redirect the user to you easily with this process.

A/B Testing is, in simple words, creating two variations of emails, sending them to users, and seeing which one gets a better response. This technique goes well with an old proverb that says not to put all your eggs in one basket. For example, you send 50 people one version and 50 people another version of a mail and see where you are getting a maximum response, and that variation would be followed thereafter. You can test various components of an email in this testing. The components that can be tested are Headline, Content, Images, Sending times. After sending emails, check parameters like Open rates, Click-through rates to analyze where you stand and which email is most accepted by customers.

Key Metrics or the Key Performance Indicators refer to a set of quantifiable measurements used to gauge a company’s overall long-term performance. Key performance indicators (KPIs) measure a company’s success versus a set of targets, objectives, or industry peers. You don’t want to enter a competition without knowing the results, isn’t it? Similarly, after you do a particular email campaign, you need to understand its results before taking any further steps; hence these Key Metrics guide you in the process. The top KPIs to measure the effectiveness of emails are Open rates, Click-through rates, Bounce rates, Unsubscribes, Traffic generated, Sales generated.

Ever observed there is a spam box in your mail box? Usually, many emails end up in spam. But what is spamming?

Spamming is receiving or sending unsolicited bulk emails. Spam may happen if both email domains are recognizing you as spam or your audience is sending your emails to their spam folder. Both of them would yield you nothing but loss.

Spam may be due to the following reasons:

Spam laws in the United States say if emails are spam, they can be legal prosecutions too, so last but not least, including them in your checklist and checking possibilities of spam in your mails is a must.

And the checklist is done! The next time you send emails, keep these pointers in hand and make your customers happy or else leave it to us as we expertise in sending personalized email campaigns. All you have to do is install Enalito’s plugin and you are sorted for the rest of your life!